Recording of the Month
November 2000 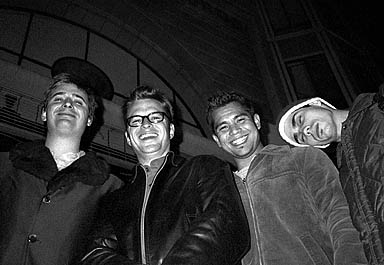 While all music is hard to describe in words, some genres, like Funk are impossible. In his book, Funk (St. Martin's Griffin 1996), Rickey Vincent wrestles with this problem on the first page: "Funk is a many splendored thing. Funk is a nasty vibe, and a sweet, sexy feeling; funk is a high, but it is also down at the bottom, the low-down earthy essence, the bass elements. Funk is at the extreme of everything."

"Extreme" is at the center of a music that lends itself to excess. Prince's tight purple-velvet suit and really bad films, and the fur-draped Brides of Funkenstein, are the first examples that come to mind of funk's willingness to go crazy. That sort of indulgence carries over into the music, where never-ending jams get self-indulgent fast. Jams stretch into hours, solos get repetitive, and ultimately the music loses its trademark steam. Outside of James Brown and his indomitable ex-bandmembers, players like Maceo Parker and Fred Wesley -- and, oh, yeah, we can't forget Bootsy Collins -- funk has too often become the province of amateurs who are stars only in their own minds. Also, some of funk's feel has been co-opted by the jazz-lite crowd.

Strangely enough, genuine well-played, idea-heavy, hot-buttered funk has taken root on the west coast, thanks in large part to The Greyboy Allstars, a band that formed in 1994 around alto/tenor sax player Karl Denson and keyboardist Robert Walter. But, as so often happens, the Greyboys couldn't quite contain the talents and ideas of two very distinct and gifed leaders. Walter and Denson are still friends and often play on the same bills, but have begun to pursue soloocareers: Denson with his band Tiny Universe, Walter with the 20th Congress. For the most part their music remains very similar to that of the Greyboys except that in each case the leader's instrument is now the major focus.

The Greyboy formula was simple, retro and way funky: drums and bass set the rhythm, everyone else fell in behind, and the jam escalated from there. There were no vocals, but lots of space for soloing. While the result sometimes sounded like serendipitous jamming, Walter confirmed for me in a recent interview than the head arrangements were all written down, and that there were very definite song structures at work. The solos, most of them improvised, tended after the first playing to vary wildly on a night-by-night basis.

Walter keeps the good times rolling on Money Shot, his second solo outing. These sweaty workouts are an acquired taste, but to the right ears can be irresistable. I'm not usually a fan of jazz organ trios, yet I like this. Imagine a manufacturer's room at Stereophile's upcoming Home Entertainment 2001 show full of white man's overbite and shakin' booties, and you're there. As cliched as it is, funk is, first and foremost, party music -- meant for every dancing atrocity you or your loved ones care to commit. In that way, Money Shot is unmistakably reminiscent of the good side of those Scottish funkateers from the now-disparaged 1970s, the Average White Band. Echoes of "Cut The Cake" are everywhere.

Mostly, though, these cats are into working the same groove highway first cut and paved by James Brown's band, the JB's. In the case of Money Shot, because Walter is a Hammond B-3 virtuoso, another obvious sourece of inspiration are the late 60s, led by the likes of Jimmy Smith. &quotRack and Pinion" shows the Walter side of the Greyboy legacy at its best. Opening with three tight, staccato downbeats that feature the trio of Cochemea Gastelum's alto sax, Walter's organ and drums from special gues Stanton Moore (from New Orleans funk outfit Galactic), the organ takes over the groove with a delicious, squiggly vamp as the alto plays the simple melody figure over the top. Solos follow as the intensity builds. Guitarist Elgin Park and bassist David Carano complete the 20th Congress.

The sound is another pleasure. On previous Greyboy discs, as well as on Walter's first solo album, Spirit of '70 (Greyboy 004), a section of the liner note was devoted to technical information - from the array of microphones employed to the tape machines used. While that data has been left off of Money Shot, the warm, alive sound shows that the boys haven't lost their interest in getting it right.

About the only downside is that flecks of jazz/funk fusion lite a la Spyro Gyra occasionally rear their empty heads; "Instant Lawn" has long sax lines in its verses that are a little too jazz-lite. Fortunately, Walter's forceful acoustic piano solos dispel the threat of monotony.

Perhaps this and the other Greyboys discs' greatest strength is the sense of knowing when to stop. You can get too much of a good thing, even when it's a smokin' funk jam. At 9:25, "The Yodel" is as expansive as Walter and his band get here. Beginning with a wonderfully cheesy little machine-gun shot on another irreplaceable '70s relic, the Wurlitzer electric piano [NOTE: it's actually a Hammond organ], the tune cooks from the start. A little second-line drumming from Moore adds exotic flavor, and Gastelum's effects on the sax, ploys usually more annoying than musical, are another nice touch.

Such touches are really what makes this stuff go -- grooves enlivened by class and taste. While Money Shot -- and the whole Greyboy aesthetic, for that matter -- may be too cool and polite for those who like their funk more ragged and raw, for me its tastefulness is its biggest attraction, other than the music's rhythmic funkiness itself. It sounds strange to say this about a funk record, but the ability to ice a groove with such astute touches as knowing where to add tasty accents, remaining conscious of the balance of retro and contemporary, and, most of all, knowing when the jam has nothing more to say, are what give Money Shot its soul. In the end, that's what funk, and every other worthy music on the planet, is all about.

Check out Robert Walter's website at http://www.fogworld.com/robert for more info on the band and the 20th Congress' gig schedule. You can also listen to their entire album online, in stereo and for free!